SPPRW aka Maximillian Spatz is an ambient musician based in Berlin, Germany. After a long stint in a couple of diy bands, he became primarily invigorated by the resurgent experimental tape scene. Initially inspired by certain individuals, SPRRW soon carved out a sound of his own which was laden with emotional fragility, reflecting his own sentimental persona. After a solo release and being featured on compilations by Male Activity and Vaagner, he is currently in the midsts of releasing new music which will follow later in the year.

Jonathan von Bergen´s Amethyst can be described as a lovechild of ambient, drone and noise. Layers upon layers of audio fragments, ranging from sampled soundcapes to gritty and gnawing synth noise walls, are woven into one another in a mediative manner. The dichatomy of aggresive chaotic sound sources versus calm and thoughtful arrangements leads to an ultimately soothing cathartic effect. 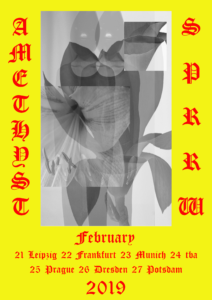