Mortaja (D)
Mortaja is Bert Lehmann from Bochum, Germany. Evidently influenced by classic Dark Ambient/Industrial artists like Lustmord, Ah-Cama Sotz and the like, Mortaja worked for years as a living room only project. Bert quickly became member of the audiophob label family and has demonstrated his musical abilities on several releases as well as live performances. His highlights so far were live appearances at the Maschinenfest and Schlagstrom festivals. Album releases so far: „Drown In Blood“ (2011), „Bone Chamber“ (2014).

Tardive Dyskinesia (D)
The beginning of Tardive Dyskinesia reaches back into 2002, when first recordings were made for what would later become the Sadistic EP. The first official works are dated in 2003, followed by two releases on Steinklang Records in 2004 and 2005. The musical work of Tardive Dyskinesia is influenced by a wide spectrum of musical masterminds: Industrial pioneers as Laibach, Scorn, Godflesh, Einstürzende Neubauten, Jesu, Brutal Truth and Vromb were as formative to the sound of Tardive Dyskinesia as Peter Gabriel or David Bowie. The fundamental concept of the project consists in experimenting with all kinds of sounds without any limits regarding the process and result. Everything can and will be possible, only constricted by the limits of phantasy, possibilities and proficiency. After Ronny released a few recordings under his own label moniker Dystonia Recordings and on other CDr-labels and going through a time of experimenting with new ideas and directions, he released his first recording „The Letter“ on audiophob in 2012. 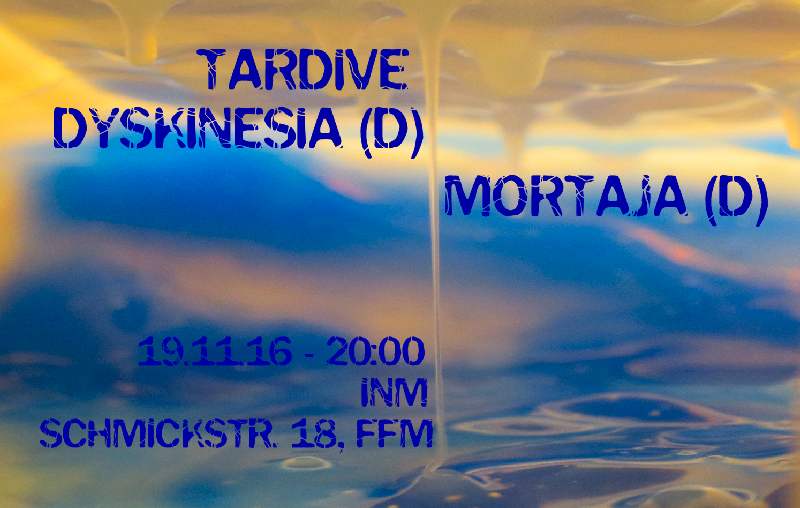